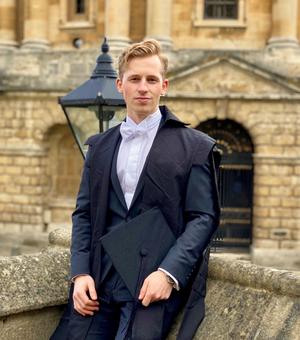 Matthias is a postgraduate student at Exeter College, Oxford University, focusing on International Relations, Economics and Organised Crime in his Master’s degree at the Latin American Centre. He holds a Bachelor of Arts in Business Administration and studied Finance, Economics and Foreign Trade in Germany, the U.S., Mexico and Argentina. Prior to Oxford, he held different front office roles at a global investment bank in Munich and London. Following his entrepreneurial passion, he is currently an honorary executive member of an international start-up, dedicated to foster future ties with Latin America and combat pressing issues in this region. At Oxford, Matthias would like to further develop his understanding of the influence of violence and drug-trafficking on Mexican politics and economics. Matthias lives out his passion for sports by training with the Oxford University Triathlon Club and the O.U.S.C. His hobbies involve football, skiing, scuba diving as well as travels to exotic places and reading good books.