The Maritime Dispute Before The International Court Of Justice: The Bolivian Arguments 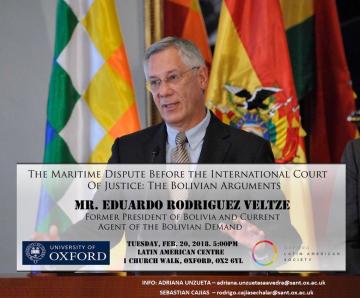 For more than a century the diplomatic relationships between Bolivia and Chile have been conditioned by the Pacific war (1879-1883), where Bolivia and Peru confronted Chile. As a product of the war Bolivia lost access to the Pacific Ocean. This country has not renounced to the right of regaining sovereign access to the Ocean. In 2014, Bolivia presented a demand before the International Court of Justice (ICJ) in The Hague, Netherlands. In 2015 the ICJ declared itself legally qualified judge on the case, the countries are now on the oral phase, and once this phase is completed the Court will give its final decision.

The former President of Bolivia, and current international agent of the Bolivian maritime cause in The Hague, Mr. Eduardo Rodriguez Veltzé, will expose the arguments behind the demand of his country, and the potential implications of the ICJ´s verdicts. The event seeks to inform the academic and student community in Oxford about an issue regarded as highly relevant for the relationships between Bolivia, Chile and Peru.

Mr. Rodriguez Veltzé is a former president of the Plurinational State of Bolivia (June 2005 – January 2006); prior to that appointment he was the chief justice of the Supreme Court. He is the international agent of the Bolivian Maritime Demand before the International Court of Justice in The Hague. Mr. Rodriguez Veltzé studied law at the Universidad Mayor de San Simón in Cochabamba and obtained his Master of Public Administration at Harvard University's John F. Kennedy School of Government.