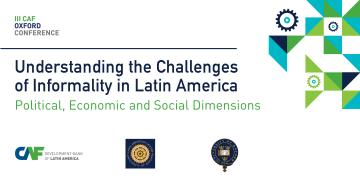 The Conference will launch a third joint programme between CAF and the Latin American Centre at the University of Oxford. It builds on an exciting collaboration between the Centre and CAF-Development Bank of Latin America over the last four years that has helped to fund scholarships for two Latin American students as well as invite a senior Latin American economist to Oxford each year. This Conference will host prominent speakers with a range of disciplinary approaches to discuss the challenges of informality across Latin America, and the political, social and economic dimensions of these challenges.

Please go to the following link to book your place at the event: https://caf-oxfordconference-november-2016.eventbrite.co.uk.